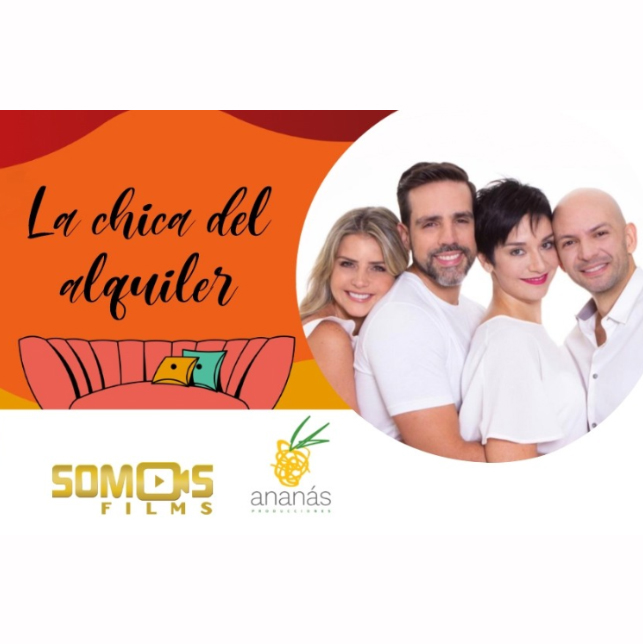 MIAMI, Fl., July, 2022 – SOMOS Films, the Spanish-language feature film production company part of SOMOS Group, chaired by Luis Villanueva and in co-production with Ananás Producciones C.A., began shooting the film La Chica del Alquiler in Venezuela. This stage in the production of the film is estimated to last 6 weeks.

La Chica del Alquiler is a romantic comedy starring the popular Daniela Alvarado (Valeria), a Venezuelan actress with extensive filmography and extensive experience in television and theater. The film co-stars and is produced by Agustín Segnini (Sebastian), an actor who also emerges as one of the most promising producers in Venezuela, and is supported by a renowned main cast made up of Patricia Schwarzgruber (Lorena), and Luis Olavarrieta (Tomás). The production was also joined by the actor and producer Augusto Nitti in the role of Anzuelo and the famous actress Maria Antonieta Duque as Coromoto. La Chica del Alquiler is being directed by veteran director Carlos Caridad. Among his works, the film "3 Bellezas"stands out, a black comedy feature film from 2015, winner of 20 international awards.

The comedy deals with the story of Sebastián, who believes he has found the love of his life in Lorena, but who leaves him abandoned at the altar on their wedding day. Desperate to get Lorena back, Sebastián travels to the house they had rented for their honeymoon in a natural paradise and there he meets Valeria, who tries to support the couple's reconciliation. Lorena arrives at the house accompanied by Tomás and begins a chain of entanglements and misunderstandings that lead Sebastián to discover what true love is, while Valeria reassesses her life as a "rental girl".

About SOMOS Films: SOMOS Films LLC is a company specialized in the production of films in Spanish and made up of a team of highly specialized professionals. SOMOS Films is part of the SOMOS Group of companies and participates in co-production and own production projects. The company generates, evaluates and develops ideas, with a philosophy of flexible participation in the different phases of film production. For more information, visit www.somosfilms.com